September 15, 2017
Tout, informer, snitch, rat, grass and I am sure there are more terms used, all have the same meaning in Ireland, someone who gives information to the British forces, some of these people may be involved themselves in the acts they inform on, they may work closely with the people they will one day see imprisoned, or worse killed. Some may be just local snoops, 50p touts as they are known In Armagh, and they give anything ranging from very valuable information, such as surveying the movements of someone of interest to the Police, to informing that someone had an argument with their wife.

Then we have what is known as the super-grass, this is an informer on speed! The Super grass is generally someone who is involved with those they inform on, someone who has been around a while and is trusted; they are not your commoner garden 50p tout. What makes them “super” is the sizable numbers of people they implicate, the trials that follow are usually show trials, with the super grass divulging a lot of information, some of it may be true, much of it lies. The trials generally have major protests outside and a lot of media interest. In Ireland being a tout makes you pond life, scum of the earth some people will say, lower than whale shite is a term I particularly enjoy.

The term super grass came into popular use in Ireland in 1981, Christopher Black a member of the Provisional IRA was arrested. After securing assurances that he would have protection from prosecution, saving his own skin like the coward that he is, Black gave statements which led to 38 arrests of alleged IRA members. This was the first big super grass trial. Two years later on 5th August 1983 22 members of the Provisional IRA were sentenced to a total of more than 4,000 cumulative years in prison, based on Black's testimonies alone.

18 of those convicted on Black’s evidence had their conviction subsequently overturned in 1986, such is the reliability of super-grass tainted evidence. It is well established that Supergrasses lie, their motivating factor being providing “evidence” to avoid prosecution.

Black, however, would not be the last big supergrass, nor would it only affect the Republican community, in all, over 500 people from both Loyalist and Republican backgrounds were put on trial on the word of a super-grass, It was a corrupt system of course, supergrasses were seduced into telling lies and implicating innocent people to save their own skins, given large cash inducements and promises of an anonymous new life.

By the mid-1980s, the super-grass system had collapsed, public concerns about the credibility of the evidence could no longer be ignored and even members of the judiciary complained they were being used as political tools to implement government security policy.

So there we are, all ancient history, super-grass trials are proven to be flawed, the evidence provided by these cretins is known to be non-credible, thank God we don’t have to worry about super-grass trials in 2017 and the prospect of innocent men and women going to jail on the word of a fantasist…….

Uh-oh! Not the case at all, today in 2017 we have a new super-grass, and his name is Dave Cullen. 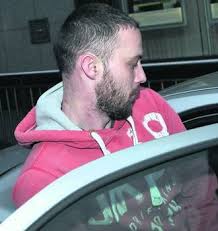 In March 2013 Dave Cullen was arrested and remanded to Portlaoise Prison charged in connection with the fatal shooting in Gormanstown of Peter Butterly. Just over a year later, in June 2014 Dave Cullen offered to turn state witness in return for the charge to be dropped, two days later Dave Cullen was removed from Portlaoise Prison under the protection of armed Guards, this secured Dave Cullen’s status as Ireland’s most recent super-grass.

To date based on the statements of Dave Cullen 9 men in total have been arrested, so far 2 of them have been convicted and are serving lengthy sentences, the rest are either remanded in Portlaoise or on bail while one man is currently unaccounted for (on the run).

Dave Cullen like many supergrasses before him has brazenly given evidence to the special criminal court; the special criminal court is a non-jury Diplock court in the 26 counties. It is believed that in return for this Cullen has secured immunity from the murder charge, has been assigned a new identity and has been given a cash lump sum along with a monthly stipend. Anyone who knows anything about Irish politics knows this is a recipe for disaster.

The arrests did not come in a flurry after Cullen turning super-grass, the arrests have continued right up until this current month (September 2017), he has to justify his payments somehow, like all touts anything he says should be taken with a bucket of salt.
It appears that the State has learned nothing, that so intent are they on breaking Republicanism that they are prepared to employ the services of the most despised and reviled creature of all, the Super-grass!

The fate of the tout is never pleasant, they generally go on to live a desperate lonely life, the money runs out, and their usefulness expires. They live out the rest of their lives looking over their shoulder as they are all too aware that they are marked men.

Their state protection only goes so far because the reality of the situation is that no one likes a tout, a deceiver, a liar, not even the people they are touting to as they have proven they cannot be trusted. They are a commodity for a short period of time and when they outlive their usefulness they are thrown to the mercy of the waves by their handlers. Touts like Martin McGartland and Kevin Fulton (real name Peter Keeley) have been very open about their unimportance after the fact, even going to court to try and secure money that was promised to them. So it would seem on top of being liars and cretins we can add stupid to the list.

As per my previous blog published in July where I spoke about the upsurge in IRA membership charges, it is clear that the 26 County state is intent on smashing Republicanism, if they are not using the word of a superintendent to jail political activists, they are prepared to use the word of an even more despicable type which is the super-grass. For our part we must do what those before us did and protest these sham show trials with every fibre of our being.