March 31, 2018
Republicans must stand united in defiance of British rule and all its vestiges The disgusting scenes from the British Armed Police in Lurgan today are enough to shock anyone; it is a throw back to what middle of the road mediocre pundits would call “the dark old days”. But to look at what happened in Lurgan today we must understand why it happened.

In Ireland Republicans and anyone who assembles on the street must seek permission from the British State, many Republicans in recent years have done this in order to avoid any kind of annoyance, for peace sake you may say. For many Republicans seeking permission from the British state stands in direct contradiction of being a republican, I am one such Republican. I stand by the Proclamation of 1916, I do not take it as a mild suggestion, to me it is the cornerstone of my faith and I abide by it as faithfully as I can. The Proclamation is not vague when it comes to this issue:

“We declare the right of the people of Ireland to the ownership of Ireland and to the unfettered control of Irish destinies, to be sovereign and indefeasible”

If Republicans truly believe that we the people have the ownership of Ireland, asking permission of the British state stands in direct contradiction to this.

As normal Republican Sinn Féin held their annual Easter commemoration in Lurgan, those attending assembled at a Memorial Garden in Kilwilkee estate, minutes after the commemoration had started scores of armed RUC descended on the event and proceeded to aggressively arrest and drag the colour party away, their actions were totally disproportionate and we are told that the justification is that no permission had been sought.

During the attack an elderly lady of 75 knocked into by a member of the crown forces who then proceeded to fall on top of her and appeared to drag others down with him, the result being an elderly lady has now been hospitalised due to her injuries. 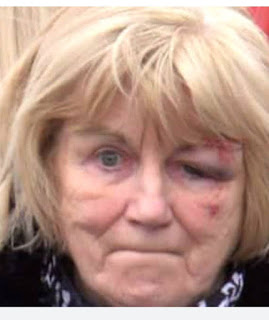 This weekend up and down the country there are commemorations taking place for the 1916 rising, many of these commemorations are taking place solely in graveyards, with others having marches with bands, before proceeding to the grave-yard or monument. Many of these band led commemorations will be state approved having filled in a bar1-11 form. For those who do not give “notification” they are deemed illegal, Lurgan is one such commemoration. As part of giving “notification” you must read and abide by a code of conduct and sign off to this effect, the Code of conduct includes stewards co-operation with the Police and being prepared to identify any persons in the public procession who may be committing an offence.


For those who tell me it is “only notification” today proves it is so much more than that to the Brits, the response from the Brits today proves that it not merely a paper pushing exercise, they see it as defiance. Don’t give “notification” and this is the reaction you can expect.

The British state have for years tried to move Republicans into a state of normalisation, to interact with them and comply with their laws, as Republicans our main job is to defy British Rule and all its vestiges. The Brits are masters of occupation and imperialism, they have been doing it a long long time, they know exactly what they are doing, there are no loopholes for us, and they have made sure of that. We either reject British rule in all its forms or we don’t, it’s that simple.

The whataboutery arguments about taking the dole or taxing your car in such a way as to justify seeking State Sanction for Republican Commemorations are hollow, designed to terminate rational Political thought. When we are acting in a political capacity as Republicans, we are duty bound to do just that! When we have state approved commemorations for men and women who died fighting that very state, it is utter hypocrisy, we are fooling no one.

It is a long time coming, but it is now time that Republicans accepted the fact that along with the British Army, RUC and Government the Parades Commission must be rejected, all members of the Parades commission are appointed by the British Secretary of state in Ireland. While we are divided on this issue and some commemorations are still complying with the Parades commission it leaves other Republican events open to this kind of attack, it sets a standard.

We must stand together and face this down, they can beat this one commemoration off the street, but together it is a whole lot harder. It is easy and comfortable to just tell yourself it’s only a piece of paper you are filling in, you can be assured of large numbers at events, but that is vacuous, that is not why we are here. There is nothing revolutionary about having your Commemoration State sanctioned no matter if there are thousands in attendance, when our primary objective is the removal of that state.

How can we as Republicans stand among the great revolutionaries of the world and hold our head high if we cannot resist the attempts from the Brits to make us comply with their demands, we the Republican people of Ireland must stand firm on this issue, asking permission, notification or whatever you want to call it, is allowing ourselves to be normalised to British Rule, when we consider the very many lives laid down for Irish Independence and the rejection of British Rule, and that it is these people we are out commemorating, it is not much to ask us to do.