It is now 100 years ago since Britain passed a law allowing women to vote for the first time, well for some women this was true, namely, only those who were over 30 and had property rights or a university education. That accounted for around 40% of all women in the “UK”.

Ireland, in 1918, was united, albeit under British Rule, Partition was still a few years away and this affected everyone in the whole 32 Counties, the whole country including men.

While women with certain criteria were allowed the vote, the act also changed the laws surrounding male votes, up until 1918 only men who were paying an annual rental of £10 and all those holding land valued at £10 or more were allowed to vote, this new legislation allowed for ALL men regardless of class, property ownership or education to vote as long as they were over 21 and for those in the British Military they could even vote at 19.

What we can take from this is not that the State actually wanted to give women rights, or equality, but coming under increasing pressure they were left with no option but to give certain women the vote, in order to do so they had to, of course, keep women one step behind men, to ensure they remained second class citizens, which meant further extending the suffrage of men.

While certain women were able to vote from February 1918, it would not be until November 1918 that they were given the right to stand for Public Office. Parliament passed the Parliament (Qualification of Women) Act which allowed women to become MPs for the first time. It stated that women were not disqualified by sex or marriage from sitting or voting as members of the British House of Commons. While there were restrictions on women voting, there were no such restrictions about women being MPs, meaning they could be elected from the age of 21, the same as for men.

Ironically of the Seventeen women who stood in the December 1918 General Election, only one was elected, Countess Constance Markievicz for the Dublin constituency of St Patrick’s. As she was an abstentionist Republican and member of Sinn Féin, she refused to take her seat. 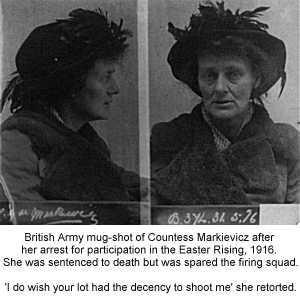 As we all know, in 1922, Ireland was partitioned after the war of Independence, the 26 Counties was now the Free State Government and they created their own constitution, unlike the British Government they extended the right to vote to all women over the age of 21, the same as men. Their sisters in the 6 Counties under direct British rule would have to wait a further 6 years.

For those in Britain, it would not be for another decade, in 1928 that women were given universal suffrage on par with men, so I wonder if the glorious centenary commemoration of women’s rights to vote is a decade early.

While we as Republicans have no truck with the Freestaters, and I certainly do not believe they are Republican, I do think they attempted to include Republican Values in their constitution to an extent, if even only for show, and extending universal suffrage to women was one such attempt.

If we take for example the 1916 proclamation, its opening line is directed to “IRISHMEN AND IRISH WOMEN”, now compare that with the opening line of the unionist Ulster proclamation of 1913 that opens with “WHEREAS ULSTERMEN” further the document entirely omits any reference to women. For me, this clearly shows a fundamental difference in ideology and one that perhaps persists to this day.

Many Irish Republican women have played a significant role in Irish society; and many of them were also suffragettes, striving not only for National independence but for liberation for the whole people of Ireland.

One of the most prominent and well known is Hannah Sheehy Skeffington, a founding member of the Irish Women’s Franchise league which campaigned tirelessly for Women’s suffrage, the organisation’s newspaper The Irish Citizen was feminist in nature and was launched by Hannah Sheehy Skeffington and Margaret Cousins. Skeffington was a radical activist and her activities saw her arrested on a number of occasions and even going on hunger strike at one point, one of her notable quotes is “Until the Women of Ireland are free, the men will not achieve emancipation”.

Countess Markievicz was another notable Suffragette as was her sister Eva. Markievicz as previously referenced was the first woman ever elected to the British House of Commons in 1918 but refused to take her seat. Her Irish Republican principles were on a level with her feminism, but she would not betray her Republican ideology, even if it meant being a trailblazer for women and actually taking her seat.

In the last 100 years, many strides have been made worldwide in securing equal rights for women, from giving women the vote to equal employment status, but we have a long way to go. In 2018 we should be further on.

For true equality and justice for all in Ireland there is only one way to achieve it, it is not to strive only for equal rights or female empowerment, it’s not to beg for concessions and fair paly from our political overlords, but to empower the whole nation, allow Ireland to take its place rightfully among the free nations of the world and secure our Republic, were women will take their place naturally alongside men as equal partners.

We need liberation and independence in Ireland not only for women but for every citizen until we have it, we cannot truly say that the women, men or children of this country are liberated or free.