Showing posts from August, 2018
Show All

You can't mask the reality 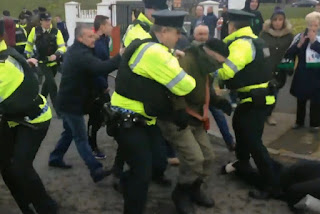 Monaghan based Republican Fergal Moore gives his insight and opinion into the recent onslaught of charges against Republicans for marches linked with Commemorations The last few years have seen many incidents of disruption and harassment by the RUC/PSNI of participants in Republican commemorations. Dozens have been arrested, charged, fined and imprisoned for remembering their patriot dead in public. Although this is not a new thing for veteran Republicans the heat has definitely been turned up of late after a period of mere simmering hostility from the state, comparatively speaking. This latest campaign by the British state and her auxiliaries is due to Republicans, rightly, refusing to engage with the Parades Commission which demands that they “give notification” of their intention to take to the streets to remember their dead. Bearing in mind that the Parades Commission reserves the right to impose conditions on parades which can effectively ban, them this “giving notificat
Post a Comment
Read more

Article published in An Spréach Magazine, a new quarterly independent Socialist Republican magazine formed by a collective of political activists. There is a counter argument to my article below but you will have to buy the magazine to read it! Magazine is available to purchase now through: www.anspreach.org Border poll should be out of the question for Republicans  So what exactly is wrong with a Border Poll and uniting the six-county northern statelet with the 26-county Free State? Isn’t that what we Irish Republicans have always wanted? A United Ireland? Well in one word – NO. This is a common misconception among the general public, you will hear people opposing a united Ireland based on the fact that in the Free State there is no NHS and other such aspects of the welfare state that are in the 'North'. Similarly, people also comment on how the Free State cannot 'afford' the north-east. I have lost count of how many times I have had to dispel these myths and expl
2 comments
Read more
More posts