August 19, 2019
Address given to the inaugural Carnlough commemoration on 17th August 2019, organised by the North Antrim Martyrs Republican flute band 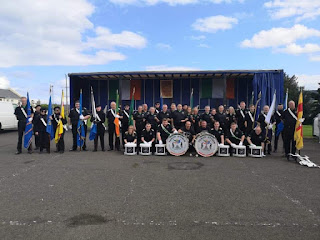 I want to start by thanking the North Antrim Martyrs band for inviting me to speak here today; it is always a true honour to be given the opportunity to address fellow Republicans, genuine Republicans.

I also want to take this time to commend the North Antrim band and all the bands for the time and dedication they put into practicing and perfecting their art, this has made them all the fine musicians we have heard here today. There are many strands to the Republican family, we have political activists, volunteers, political prisoners and one of the most important throughout the years has been Republican bands, they are an integral component, they keep our morale up and our feet moving in even the most difficult of times. They are an example in discipline and it is through music that many young Irish people are first introduced to our Republican Martyred heroes.

It is no secret that sectarianism was prevalent in eighteenth-century Ireland and it was no mean feat to persuade Catholic, Protestant and Dissenter to put aside their differences and view each other simply as fellow Irishmen, something that Republicans until this very day struggle to do.

Although the United Irishmen met with remarkable success, it was quickly recognised by the establishment that sectarianism was a useful ally in the fight against the rebellion. How sad it is today that the descendants of such brave and noble Irish Patriots have been persuaded by this ploy. 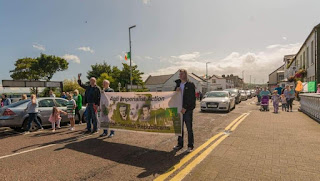 I believe, however, that we can once again persuade the Irish people, Catholic, Protestant and dissenter that it is not each other that is the enemy but the foreign British occupation, that is our task and one in which I believe we can be successful in. I truly believe that the permanent establishment of the Irish Republic, as proclaimed at Easter 1916 is the only way in which the Irish People will ever know true peace.

We must face reality too, that there is a section of Irish people, who do not want or believe they do not want the Irish Republic. For many they fear that their religion, culture and heritage would be downgraded or worse annihilated, they fear that “home rule means Rome rule” and why wouldn’t they fear this, they believe a precedent was set with the creation of the Freestate and what turned out to be essentially a Catholic theocracy.

It is our job to dispel the misconceptions of what the Irish Republic would entail, Republicans never supported the Freestate and we do not support it now. We stand for the whole people of Ireland regardless of religion or background, we will not settle for anything less than the Irish Republic. We do not want a 32 county Freestate but a whole New Ireland that will uphold the rights of all citizens and work for the betterment of its entire people.

We must reach out to all sections of Irish society and persuade them of the benefits of the Irish Republic.

One proposal that I believe has the potential to unite all sections of Irish Society is federalism, a federal Ireland would give the whole people of Ireland a real say in their future, it would ensure that even the most ardent Loyalist would have proper representation in a post-occupation Ireland. Power and control would be closer to the ordinary citizen allowing for real democracy; it would see a redistribution of wealth and power throughout the Country.

This is but one proposal and one in which I believe, you may have a different vision; the important thing is that we discuss all options.

For any of this to happen, however, before we can even start the task of re-organising our Nation we must go back to the age-old demand, the demand first cried out by the United Irishmen, we must break the connection with England. Our insistence now must still be nothing less than a British Declaration of intent to withdraw from our land.

To get the British to this position will be no easy task, as Republican activists the challenges we face are tremendous, that is not surprising given that our agenda is to dismantle this corrupt state and we make no apologies for it.

The British and their allies will do anything to ensure the security of the six-county state. Republican activists can expect to be harassed regularly, something that the public is not aware of.

There are continual stop and searches, house raids and arrests of those who carry out legitimate political activities. There are many more Republicans, who will face trumped-up charges in either the six or twenty-six county courts.

In the Free State, IRA membership charges are on the rise, evidence of such membership can range from anything such as owning a book on Irish politics to having a picture of a dead volunteer on your phone.

In the six counties, MI5 spooks engineer evidence to railroad political activists into prison and they continue their long tradition of set ups as we see from the case of the Craigavon two.

Given what we know and regardless of what the soft soapers and revisionists in Stormont or Leinster House try, we are not convinced that things can be peaceful or normal as it stands, nor do we want them to be, the normalisation project has been an abysmal failure on their behalf. 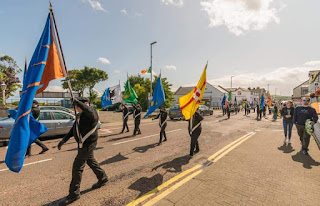 This week marks 50 years since the start of what is commonly referred to as “the Troubles”. It marks 50 years since Bombay Street was burnt to the ground by a Loyalist mob supported by RUC thugs. Billy McKee and his comrades did their duty and defended the area and its people from this state-sanctioned terrorism.

Much has been said over the recent days about this period in our history, the media have diluted things down to a mere civil rights issue that if somehow Nationalists had treated equally there would have been no IRA campaign. Yes, civil rights catalysed the most recent campaign against British Rule but it was not for civil rights, but national liberation. We have not yet secured national liberation and history has taught us that in every generation there has been resistance to British Occupation, it is impossible to see how this trend will not continue.

The British and the Free State have tried every trick in the book to dismantle Republicanism, internment, curfews, the hangman and even murder and nothing has worked. Our very presence here today proves that they have failed and they will continue to fail.

The British continue to insult the Irish people as they try to make excuses for British state murderers who shot down innocent people, as in the case of the infamous soldier F. The token prosecution of Soldier F is something that all of us can see through, we support the families of the bereaved in their pursuit of justice, we want nothing more than for these families to have closure and peace.

The supposed prosecutions of elderly British Soldiers is designed to pacify us. Do not be under any illusion that any British Soldier will service 1 minute in Prison, it would seem that 40 + years after these heinous murders took place the British are banking on the perpetrators dying off so they do not have to dirty their hands in dealing with it.

Regardless of prosecutions or concessions, we know all too well, that there can never be peace in Ireland until every last vestige of British Rule is removed, reforms, concessions and tokenism is not something that can bring peace, it brushes the main reason there has ever been trouble in Ireland under the carpet.

While British rule remains the possibility of another Bloody Sunday, another Ballymurphy is very much on the cards and as in times before, what will follow will be a whitewash and criminalisation of the victims.

As we leave here today, we must take with us a renewed optimism for the Republic, a renewed sense of comradeship to make it happen. Much is said about the fragmentation that exists within the Republican family, however there is more to unite than divide us.

We all want to live in a country free from manipulation that cherishes its people, that tells its people the truth rather than treats them with derision and contempt, on this we all agree, on this we can all work together, to finally secure the Republic.